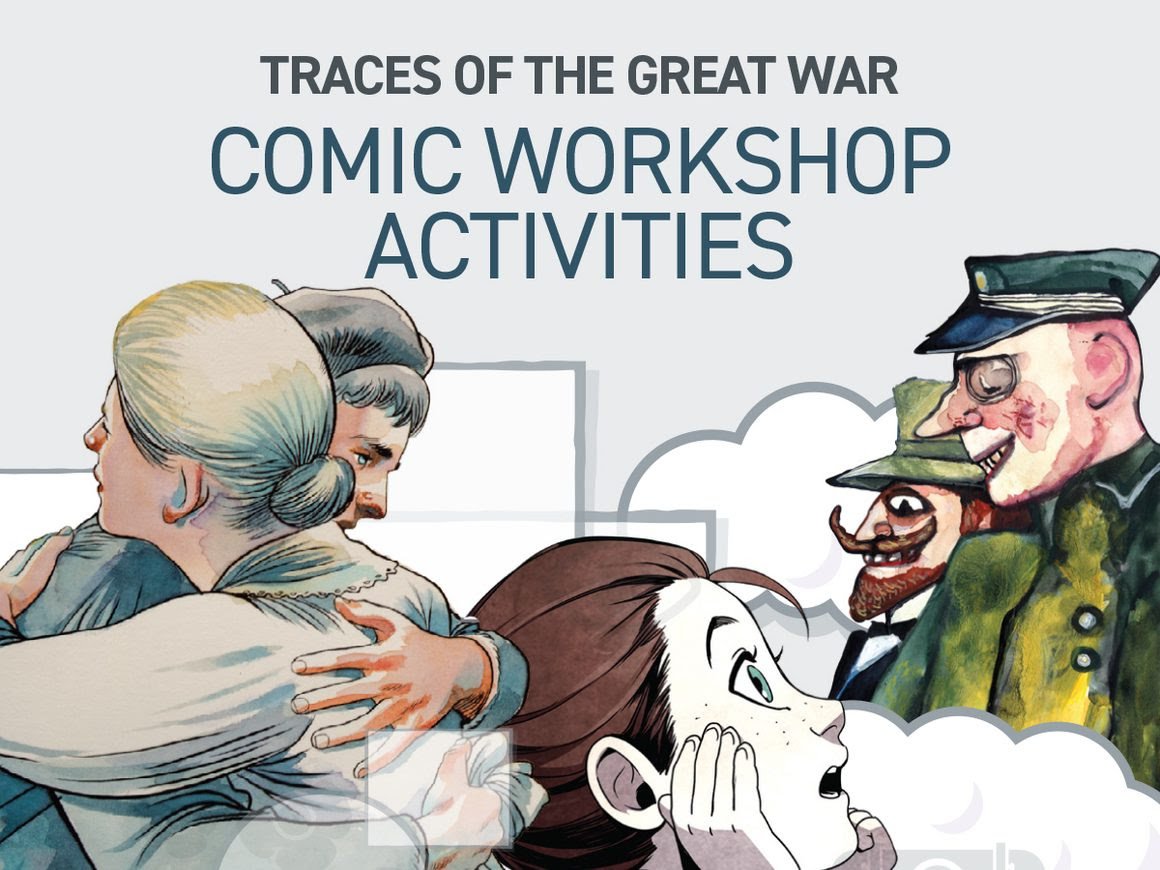 Traces of the Great War Workshop Resources Released, aiming to help get comics into classrooms across the UK

The Lakes International Comic Art Festival is pleased to announce the release of its Traces of The Great War Comic Workshop Activities Resources. Created as part of the organisation’s ongoing commitment to the 14-18 NOW arts project through its Legacy programme, the free resources also highlight how useful comics can be as a teaching aid, with a reach that combines both the visual and the written word.

14-18 NOW was the UK’s arts programme for the World War One centenary. Working with arts and heritage partners all across the UK, the organisation commissioned new artworks from 420 contemporary artists, musicians, film makers, designers and performers, inspired by the period 1914-18. The huge project included the publication of Black Dog, a graphic novel co-created by Dave McKean, and Traces of the Great War, an anthology of comic stories examining the impact of the First World War to this day across Europe. The book features work by Charlie Adlard, Simon Armitage, Edmond Baudoin, Joe Kelly, Dave McKean, Mikiko, Ken Niimura, Sean Phillips, Ian Rankin, Bryan Talbot and Mary Talbot, and many others.

Both books were instigated by the Lakes International Comic Art Festival, working with both British and international partners and as part of this, the Kendal-based organisation also created resources for teachers and school children to tell their own stories of how they viewed the world-changing events of over 100 years ago.

Now, artist and educator Hester Harrington, working with illustrator Holly Wardlaw and Steve Kerner of Curious Road, has created a brand new set of new creative resources for schools, available from the LICAF web site, in response to the content of Traces of the Great War.

“This project combined all my skills in a very collaborative way,” she says. “I loved it, in part because as a teacher, too, it really brought it home to me that no matter how good the resources you create are, it’s hugely important that they empower both teachers and school children. It’s absolutely vital they’re seen as relevant to the current curriculum, to encourage their use, too.

“I knew from the outset that I was in a privileged position to create a brand-new project,” says Hester. “I think it’s great that 14-18 NOW saw the potential in the anthology and that I was set free to devise creative resources.”

Working with local schools and others in Cumbria – the Home Educating family (the Holderness’s) from Kendal, Sandgate School, and Hornby St Margaret’s C of E Primary School – Hester “road tested” the resources. In this, she was inspired in part by some of the artists who created Traces of the Great War in the first place, such as the painting style of Edmond Baudoin, while also ensuring they could be utilised in practical ways.

My ‘no mess’ approach was very well received!” she laughs, “Just using affordable art materials, too, developing accessible activities for all and using techniques that could be replicated easily and independently at home.

“It’s been the perfect combination of comics, art and education – whilst picking up on strands of well-being and shine a spotlight on the continued relevance of World War One in today’s society,” Hester continues. “This project has been a huge personal achievement, but has also reinforced – in my mind at least – the fact that comics in the classroom really do have a significant, valuable and unique role to play.”

• For the full project and supporting resources head to comicartfestival.com/live/comic-workshop-activities

This first video tutorial demonstrates a printing technique that allows youngsters to take a closer look and visually engage with the full content of an image. The comics mechanism of adding an additional second smaller panel creates an opportunity for individuals to add their own comment, voicing what they have learnt through their visual study.

This second video tutorial demonstrates a range of creative techniques to enhance visual learning across the curriculum, in any learning environment (no sink required!). These watercolour-based painting techniques, inspired by Edmond Baudoin’s illustrations, can be used to visually investigate a range of different subject material.

• For the individual projects and supporting resources head to comicartfestival.com/remembrance-day

GETTING COMICS INTO THE CLASSROOM – BACKGROUND NOTES

“My intention was to create a series of resources that would be succinct and relevant for teachers to find easily on the Internet, understand relevance and objectives easily, and be able to print off, all in under 15 minutes,” says Hester Harrington. “Teachers time is precious so finding resources needs to be a swift process.

“I feel I have a good position of understanding from my experience of having one foot firmly in education, whilst also having had involvement in developing creative initiatives in different community scenarios.

“In order to get comics into the classroom the source materials also have to link to other educational initiatives that schools were keen to focus on as part of their ongoing curriculum, whole school development plan, or specific key focuses for youngsters.

“Eventually, the projects which I designed each took on each of these initiatives. Focusing on either mathematics (a core subject), creative materials in the classroom (bringing artistic process and visual investigation into all areas of the curriculum), or the use of ‘traces of war’ as a narrative to highlight the continued relevance of World War One and conflict in modern society, as well as tie in strands of well-being.

“I have plenty of experience in developing resources as a secondary school art teacher and had already begun to generate ideas through my part time role teaching in Queen Elizabeth School, in Kirkby Lonsdale, during the original creation of the Traces of The Great War anthology.

“Projects I developed at QES had been in response to already existing comics that featured elements of war or conflict as a main theme, such as comics Maus, The Terrorist, Palestine and Black Dog. It was an easy and obvious step for me to create activities that would use individual comics from the anthology as an inspirational springboard.

“Through LICAF I had also previously been given the opportunity to work at a local primary school – evolving my ability to deliver educational materials suitable for a wider age range.”

• For the full project and supporting resources head to https://www.comicartfestival.com/live/comic-workshop-activities

The Traces of the Great War anthology, published in partnership with Image Comics in 2018, was commissioned by 14-18 NOW, the UK’s arts programme for the First World War centenary, La Mission du centenaire de la Première Guerre mondiale, On a Marche Sur Le Bulle and Lakes International Comic Arts Festival. It was supported by the National Lottery through Arts Council England, the Heritage Lottery Fund and from the Department for Culture Media and Sport.

Featuring strips from francophone, British and other artists from across the globe, Traces of the Great War will include a dedicated website, education programme and exhibitions.