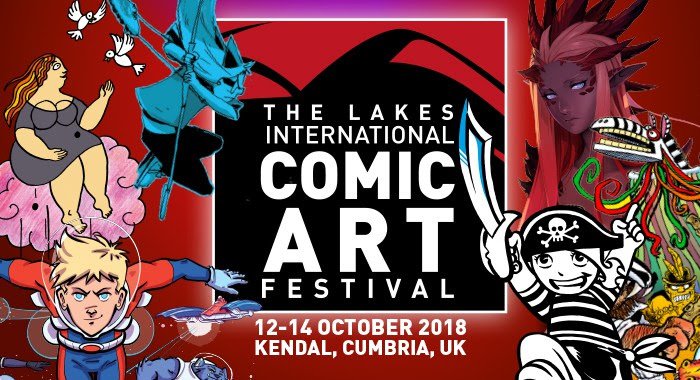 Celebrating 20 Years of downthetubes at the Lakes Festival

Happy Birthday to Us! (Well, almost…)

It look like it’s going to be a bit manic next week in the run up to the Lakes International Comic Art Festival, so I thought I’d write to you now and thank you for your continued support for downthetubes as our 20th anniversary draws ever nearer. (Gulp!)
The new look for the site is taking shape, all things technical, as ever, taking longer than expected, but one welcome addition to downthetubes are new articles by the brilliant Joe Gordon, formerly of Forbidden Planet International. With his talents, we don’t know how long he’ll continue to be able to contribute but he’s already posted some great items, including a report on the Bash Street’s Back exhibition in Dundee – which has done record visitor numbers – and a smashing item on Neil Slorance‘s new comic, Modern Slorance: The Finnish Issue.
This week has, of course, been dominated by the sad news of comic artist Carlos Ezquerra‘s passing, aged just 70, and Joe posted a tribute here to complement our news item.
Carlos’ passing is a tremendous loss; he was a wonderful creator and lovely, charming man. My thoughts and sympathies are with his friends and family at this time. It’s good to know his passing will be marked with a special publication in his native city. This shock, following swiftly after the passing of American artist Norm Breyfogle, has hit a lot of fans hard.

All this somewhat dampened the news that Rebellion now owns a lot of classic British comics characters, acquired from TI Media (the latest name for IPC), including Robot Archie, the Steel Claw, Bad Penny and many more. Inevitably, it’s prompted the usual confusion over which comic company owns which titles, so I spent some time putting together a feature that might help in that area: “British Classic Comics: Who Owns What?” – I hope you find it useful.

In brighter news, for me, anyway – 2000AD artist Smuzz has completed another chapter of our SF epic “Crucible” and we’re looking at ways to collect everything released so far in a collection in 2019. I’ll be able to say a bit more about “Return to Planet Earth” by Wamberto Nicomedes, Rodval Matias and others, soon, too, but for now, there’s a teaser page here about the project!

Meanwhile, the collected “Gateway City” by Russell Mark Olson, which I edited, is out now and will be on sale at the Lakes International Comic Art Festival from this talented creator direct, and is also available from Room 237 in Southsea and Comics, Games & Coffee Ltd in Chichester, It looks terrific!
I hope I’ll see some of you next week in Kendal! downthetubes contributors Ian Wheeler and Colin Noble will also be there!

Drawn during a planning meeting at Brew Brothers for next year’s Lakes International Comic Art Festival (and 2020, too -there’s no stopping us! Dare I tell you one of the themes this early?) the winner of our Ken Reid Power Pack books competition, in partnership with downthetubes and publisher Kazoop was Matthew Tilley.
Congratulations to Matthew and better luck next time to everyone who entered, who all guessed correctly that we launched in 1998.
The books, which collect every original “Frankie Stein”, “Queen of the Seas”, “Jasper the Grasper”, “The Nervs” and “Dare-a-Day Davy” from 1960s comics are available to buy from www.kazoop-comics-shop.com

downthetubes will be celebrating our 20th anniversary at the Lakes International Comic Art Festival. We’ll have a stand in their Comics Clock Tower alongside B7 Media, producers of the award-winning Dan Dare Audio Adventures.

Pulled from the Memory Banks!

Copyright © 2018 downthetubes.net, All rights reserved.
You’re receiving this because you signed up for it on the downthetubes.net web site. If you have received this in error, you can opt out using the instructions within this newsletter

Join Us in Kendal!
Buy your Festival tickets now!

We’re ready for action here in Kendal, with the Festival set to kick off next Friday, 12th October – have you bought your tickets yet? This year, the Festival is even bigger and better than ever, with some of the best internationally-renowned comic artists, writers and creators heading to the Lake District for a packed comic art weekend spectacular – and the fun has already started, with our annual Windows Trail now up and running and several exhibitions already up and running (details below), with more to come!
One immersive event we’re looking forward to next weekend is the team up between Clockwork Watch, fronted by guests Yomi Ayeni and Corey Brotherson, and Kendal College, who are bringing some great steampunk-inspired antics to the streets of Kendal.
They’ve even got The Simpsons director and cartoonist David Silverman roped in, as you can find out by listening to the latest Lakes International Comic Art Festival Podcast! (Read on for more that).
With over 70 guests, a packed Comics Clock Tower that’s now spilled over into the new CCT Extra, it’s going to be a great weekend – so see you there!

Follow the links for more information about this year’s exhibitions!

• 31 AT 31: THE POSTER ART OF LUKE MCGARRY: VALLUM GALLERY, UNIVERSITY OF CUMBRIA, CARLISLE
Runs from 12th October until 2nd November 2018 with an Opening Reception on Thursday 11th October. Don’t miss this fantastic exhibition of Luke McGarry’s drawings from 2008 – 2018

• THE ART OF STRANSKI: THE WILDMAN GALLERY, WILDMAN STREET
Runs from 12th until 15th November featuring “The Art of Stranski” by Lorenzo Etheringon

Windows Trail Up and Running!

Our annual Windows Trail, supported by Kendal Business Improvement District, is up and running and it looks terrific! Featured above is some preliminary art by Pete Taylor and Matthew Wilson’s work, “Comic Clocks” which is in the window of Pomegranate & Sage.

Over 60 businesses have joined in with the Trail this year, which also includes two “trail-within-a-trails” (a new feature believe, for this year) – “Co-Story” arranged by Petra Blahova and “Draw The Line” from Unbound.

“The Windows Trail is a wonderfully inclusive display of original artwork created not just by professional and non-professional artists,” says co-ordinator Marianne Lusby, “but also by educational and community groups who have interpreted the themes of this year’s Lakes International Comic Arts Festival Windows Trail.

“It provides a unique opportunity for people of all ages, local businesses and local, national and international artists to connect and collaborate in the production of a stunning display of their creative skills. It gives our visitors a uniquely inspirational and thought-provoking way to explore what the town has to offer.”

• The work can be seen in businesses’ windows throughout Kendal until Friday 19th October. Our thanks to all the businesses involved and Kendal BID!

A huge line up of both British and globe-spanning international comics talent will be attending this year’s Lakes International Comic Art Festival in October 2018.

Knockabout is back again with its Knaughty Corner in the Romney Room in the Comics Clock Tower at LICAF 2018!  The star attractions will be Hunt Emerson and Kevin Jackson signing Bloke’s Progress, their new book about John Ruskin and there’ll be books by Alan Moore, Gilbert Shelton, Martin Rowson, Melinda Gebbie, Bobby Joseph and more.

Comic creators from across the UK and beyond will again take over Kendal Town Hall, where a huge range of comics will be on offer, including the latest graphic novels from around the globe courtesy of Nottingham-based comic shop Page 45. We’re also extending the Clock Tower experience by turning over the Shakespeare Centre for CCT Xtra, just a few minutes walk from the town hall, to comics mayhem!

Coming to the Comics Clock Tower in 2018 will be…

The Lakes International Comic Art Festival is the only one of its kind in the UK, taking place in one of the country’s most beautiful areas – the English Lake District, in the market town of Kendal. Modelled on European-style festivals, such as Angoulême in France, it takes over the whole town for a weekend of comic art. Its aim is to celebrate the whole spectrum of comic art, inspiring existing comic art fans and creators and, it hopes, generating new audiences and creators too. It invests in creators through a commissioning programme and has an emphasis on developing international collaborations.