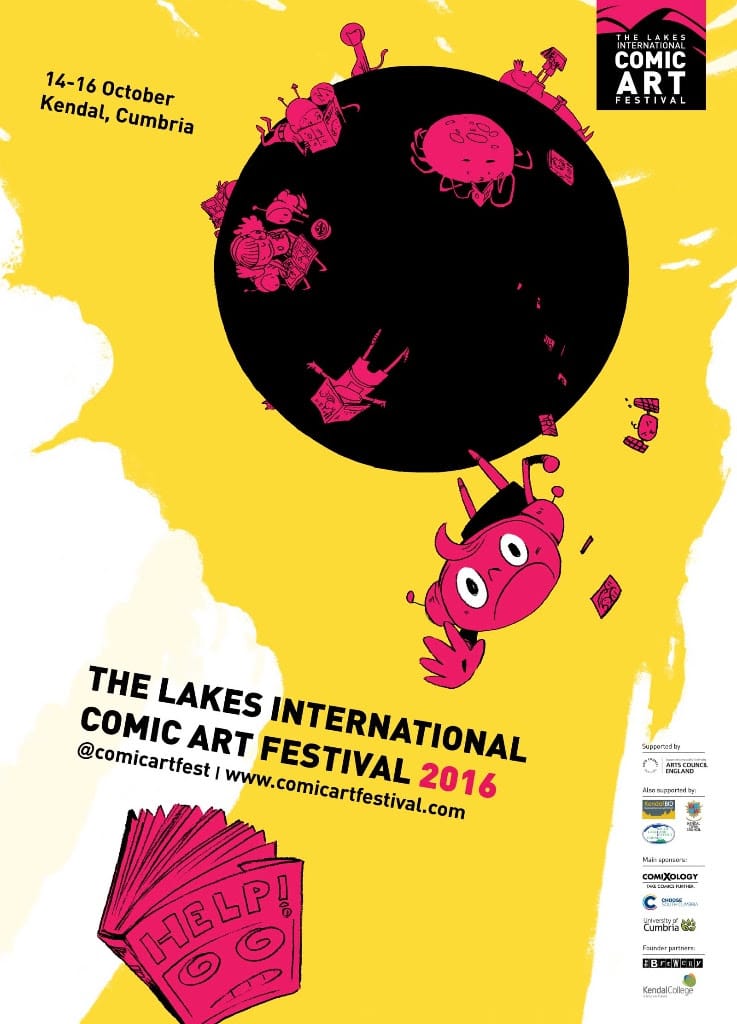 Simply crammed with information about this year’s three day-long Lakes International Comic Art Festival weekend (14th – 16th October) in Kendal, we’re delighted to announce that in addition to full coverage of the event on our web site, the 2016 Festival Programme is available to view and download now!

We have an absolutely packed programme for you this year, including guest talks, film screenings, workshops (sign up fast, because places are going quickly!), our ever popular Comics Clock Tower, exhibitions, pop up events, unexpected comic mural drawing (including one by last year’s mural champ, Joe Decie – in Morrisons!)

Guests this year include:

Joining this growing list of top international and British comics guests, in partnership with The Finnish Institute of London , will be artists Hanneriina Moisseinen , Virpi Oinonen , Ville Ranta, Johanna Rojola and Petteri Tikkanen , along with musicians Niko Kumpuvaara and Aleksi Ranta, the latter part of the Comics in Concert project.

The festival features comic artists from around the world, as well as performance, film, exhibitions, comic trails, workshops, master classes, live drawing and independent retailers and publishers. The events programme is bursting with opportunities to get up close and personal with some of the leading comic artists and writers from across the world – see them draw, talk about their work and bring comics to life.

• In a hurry? Here’s the Festival in a Flash!

The Lakes International Comic Art Festival, in partnership with Lancaster University, is delighted to announce further details of this year’s Festival Weekend Opening Night event on Friday 14th October – “Clash of the Toon Titans“, a battle between comic superstars Asterix and Tintin for the hearts and minds of attending comic fans.

The Beatles or Stones? DC or Marvel? Connery or Moore? Strictly or X Factor?

There are some questions that divide the nation. You cannot sit on the fence. You have to choose. This is the biggie. In the second half of the twentieth century, Francophone comics culture was dominated by two nerdy little characters: a cub reporter from Belgium with an unlikely quiff, and a pint-sized ancient Gaul with an improbable moustache. Between them they have spawned 60 books, 24 movies, dozens of scholarly works, at least one theme park and an entire art style, ligne claire. Their creators have been deified with honours like the Legion d’Honneur and demonised by being banned from libraries over the years. But the weird thing is: few people like both of them. You’re either an Asterix or a Tintin fan.

For the opening event of LICAF 2016, we’re going to settle this thing for good. We’re bringing together two top teams to slug it out on stage – without the help of a magic potion – and establish which character most deserves that cherished place on your oversized bookshelf. Putting the case for Tintin is Benoît Peeters, novelist, philosopher, Visiting Professor in Graphic Fiction and Comic Artat Lancaster University, and author of two books on Tintin’s creator, Herge. Holding out gallantly against the oppressors is Peter Kessler, BAFTA award-winning producer and author of ‘The Complete Guide to Asterix’.

Joining them live on stage will be Walking Dead artist Charlie Adlard, comic book writer Leah Moore, Australian comics scholar and creator Stuart Medley and VIZ artist Graham Dury. On screen will be a host of comics artists, authors and readers with the ever-popular comic creator Hannah Berry acting as referee. To top it all our special festival guests, all the way from Los Angeles, Luke and Steve McGarry, will be bringing their fast-draw cartooning talents to the table illustrating the entire event as it happens.

This opening event is courtesy of Lancaster University to inaugurate and celebrate the appointment of Benoît Peeters as their first Professor of Comics. And, as if all this wasn’t enough, at the end of the evening we will be revealing who will be the second UK Comics Laureate for 2017 with its first incumbent Dave Gibbons handing over the baton.

• Buy your Festival tickets now from The Brewery, Kendal – www.breweryarts.co.uk

Bryan Lee O’Malley, who is making an exclusive guest appearance at this year’s Festival, is a Canadian cartoonist who created the “Scott Pilgrim” series, which inspired the cult classic film Scott Pilgrim Vs The World (directed by Edgar Wright). His most recent book is the Eisner-nominated, New York Times-bestselling Seconds.

He’s currently writing comic book series Snotgirl, which will be published by Image Comics, while working on his next major graphic novel. He lives in Los Angeles, California.

Read the independent Red Research Evaluation Report on the 2015 Festival, which note the weekend-long event attracted almost 14,000 people to Kendal and generated an estimated £1.7 million for the host town