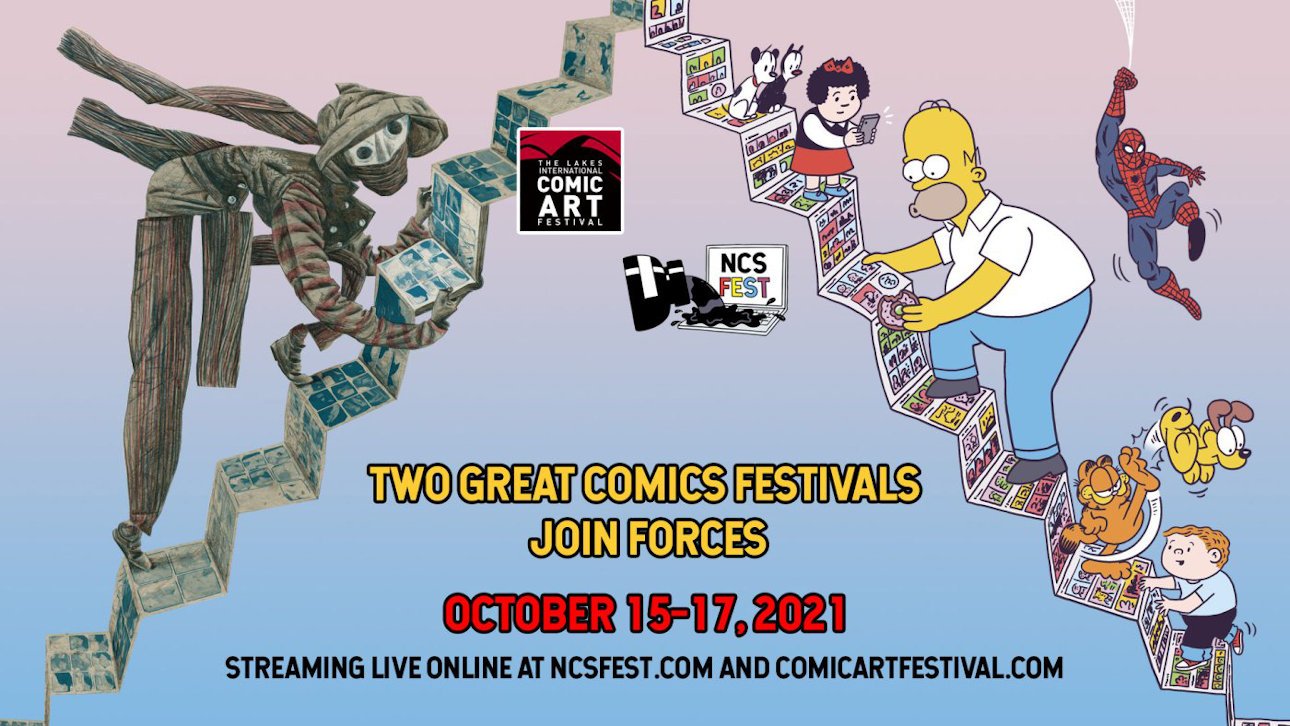 If the physical Lakes International Comic Art Festival coming to Kendal in October isn’t enough excitement for you already, then you’ll be delighted to hear that the organisation has partnered with the US-based National Cartoonists Society to bring you another virtual NCSFest, complementing real world events over the weekend.

NCSFest will take place on Saturday 15th and Sunday 16th October 2021, with LICAF running from 14th – 17th October in the Cumbrian town, which will, as usual, be awash with comics creators from around the globe.

The team behind NCSFest are putting together a fantastic schedule of virtual events alongside the awarding of the 2020 Divisional Reuben Awards, which includes taking part in LICAF’s opening event “Battle of the Toons” on Friday 14th October.

Eight comic book characters are floating high over the Lake District in a hot air balloon. All is tranquil until… LICAF, we have a problem! The balloon is sinking and all excess weight must be lost to stay in the air!

This gala event is a classic balloon debate featuring eight guests, each taking on the role of their own chosen comic character. At the end of the night, only one will survive, and that depends on how well they make their case to you, our audience.

In an intercontinental twist, some of the contestants will be joining in live from NCSFest in America. And the whole thing will be lampooned live by master guest cartoonists Steve McGarry, Luke McGarry and friends.

As if that weren’t enough, the opening night will also feature the awarding of this year’s Sergio Aragonés International Award for Excellence in Comic Art and some other exciting announcements.

So – mark your calendars and stay tuned to the NCS blog and LICAF web site, and social media for further updates on and unmissable schedule with a very special international twist – our friends at the Lakes International Comic Arts Festival will be sharing in the fun and programming live from across the pond!

NCSFest is the brainchild of Steve McGarry, the syndicated cartoonist and story artist who serves as President of the NCS Foundation, the charitable and educational arm of the National Cartoonists Society.

To help fulfill his vision of putting the NCS at the heart of a free cartoon arts festival to rival the great European events, he enlisted the aid of Julie Tait, Director of the Lakes International Comic Arts Festival.

With the aid of an incredibly strong team and an army of volunteers – as well as the expertise of Mathieu Diez, then Director of French festival Lyon BD – and the full support of the city of Huntington Beach, NCSFest was born in 2019.

Formed in 1947, the National Cartoonists Society is regarded as the most prestigious organisation of professional cartoonists in the world, with such legends as Peanuts creator Charles M Schulz, Walt Disney, Rube Goldberg and Milton Caniff among its alumni.

Today’s membership numbers more than 400 eminent cartoonists and many of these world famous creators are appearing at NCSFest. The NCS will also stage its annual Reuben Awards – the comics and cartoons equivalent of the Oscars – during the Festival.

The Lakes International Comic Art Festival celebrates great comic art from across the world, and strongly believes Comics Can Change The World, developing and offering a wide range of outreach projects local, national and international, working with key partners and other Festivals across the globe, funded by the Arts Council.

Its annual Festival event is the only one of its kind in the UK, taking over the whole town of Kendal, on the edge of the Lake District and bringing the town together for a weekend to celebrate the amazing world of comic art.

The events programme is bursting with opportunities to get up close and personal with some of the leading comic artists and writers from across the world – see them draw, talk about their work and bring comics to life. A free Family Zone provides drop-in activities for all ages, alongside a series of fantastic workshops for kids and teenagers.

The Lakes International Comic Art Festival is the only one of its kind in the UK, centred on events and comics projects brought to you from one of the country’s most beautiful areas – the English Lake District, in the market town of Kendal.

Modelled on European-style festivals, such as Angoulême in France, the annual Festival usually takes over the whole town for a weekend of comic art every October.

Our founder partners are the Brewery Arts Centre and Kendal College, and we are also supported by the Australia Council for the Arts, The British Council, The Finnish Institute in London, Flanders House, Flanders Literature, Institut Français du Royaume-Uni, the Italian Cultural Institute, the National Cartoonists Society and Wallonie Bruxelles International.