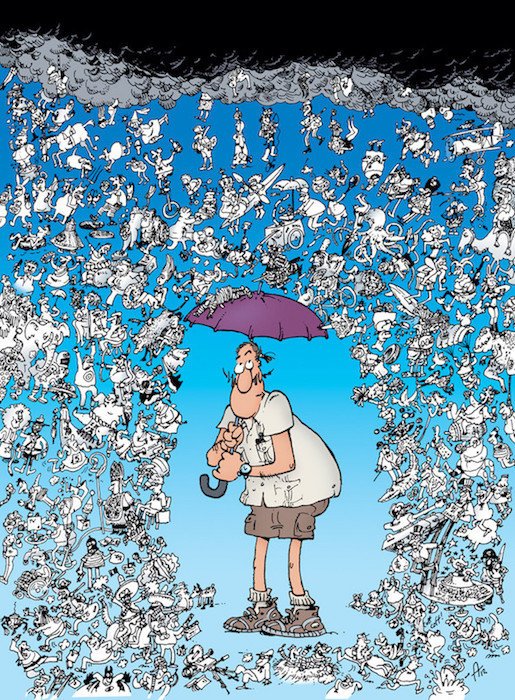 Celebrating the amazing world of comic artists, creators and writers, the biggest names in comic art are heading to Kendal with over 70 special guests from across the comic world.

The Lakes International Comic Art Festival returns for its fifth year to Kendal, Cumbria, from 13 to 15 October 2017. Celebrating comic art from across the world, the weekend festival takes over the town of Kendal, on the edge of the Lake District. This year, artists, creators and writers from Japan, the US, Canada, Australia, Finland, as well as other European comic creators will take part in the festival.

The festival features live comic drawing, films, exhibitions, comic trails, workshops, a free family zone and a comic marketplace featuring independent publishers. The events programme is bursting with opportunities to get up close and personal with some of the leading comic artists and writers from across the world. New for this year is a festival pass system for the festival. The main events programme will be exclusive to pass-holders and there will be an exclusive, guest-related comic art goody bag for all pass holders to collect on arrival.

Julie Tait, Festival Director said: “There is something for everyone at the festival this year whether you are super hero fan, mad about manga or just love seeing incredibly talented artists at work. We are thrilled to have such an amazing guest list this year with artists joining us from across the world and from so many different genres of comic art.”

Highlights of the weekend include events such as the Ultimate Comics Master Class with top MAD Magazine artist Tom Richmond; an in-depth interview event with Spider Gwen artist Jason LaTour; the launch of new work by creators such as Mal Earl and Kermit Leveridge and the chance to meet the “insanely imaginative” 2000AD writer Peter Milligan. You can discover how comics can shine an uncomfortable light on our modern world with Hannah Berry, Darryl Cunningham and Fumio Obata and find out more about the art of top illustrator Michael Cho. You can meet Usagi Yojimbo creator Stan Sakai and experience Finnish comics – and the Moomins! – as you have never experienced them before.

On Friday, the Festival’s opening Gala Opening Night this year will be ‘Quick on the Draw‘ – a spectacular evening of live draw featuring some of the fastest, funniest and most talented cartoonists on the planet. The legendary Sergio Aragonés (who has only made occasional visits to the UK in the past) will demonstrate his quick-fire genius together with superstars from the United States’ cartooning scene. Sergio is considered the fastest comic artist on the planet!

The free Family Zone offers workshops, shows and activities aimed at all levels and ages, from pre-school to teens, from absolute beginners to experienced comics makers.

And don’t miss the wonderful windows on the Comic Art Trail as you wander around Kendal. All the artists involved, whether from local community groups or schools right through to professional artists, take their own approach to their individual shop and business windows.

Our Cartoon Cafe at the Warehouse Cafe, Brewery Arts Centre will feature some of the world’s leading comic creators including Charlie Adlard of Walking Dead fame, Duncan Fegredo, the Hellboy Artist and Eisner Award winning artist Sean Phillips. The cafe is an opportunity to try out the latest digital art tools from Wacom.

The legendary Comics Clock Tower is open on Saturday and Sunday all day and full of independent creators, publishers and retailers, representing a wide range of comics from around the world.

And make sure you make a beeline for the Canadian Comics Lodge and Finnish Village – both hosting events throughout the day during the festival.

Festival passes can be purchased from: www.comicartfestival.com