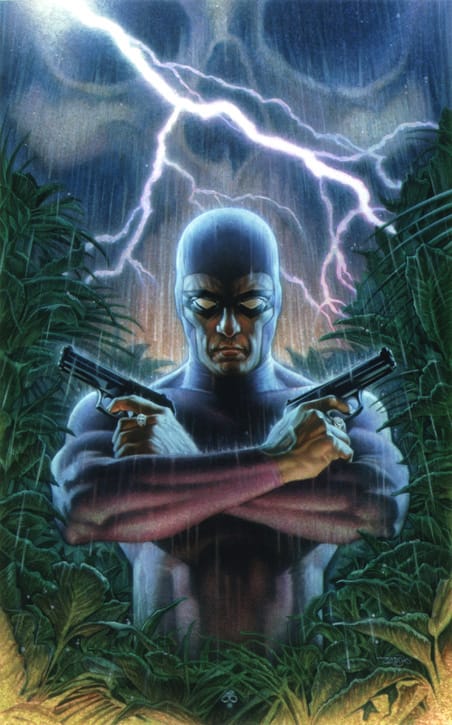 Article:
You might know the City of Chicago for the President of United States Barack Obama, or maybe for the some of the biggest names in the sports industry, The Chicago Bulls of the National Basketball Association (NBA) are one of the most recognized basketball teams in the world. During the 1990s with Michael Jordan leading them, the Bulls took six NBA championships in eight seasons (only failing to do so in the two years of Jordan’s absence). The Chicago Blackhawks of the National Hockey Ligue (NHL), who began play in 1926, have won four Stanley Cups. The Blackhawks are the 2010 Stanley Cup champions. And who could forget the fire in 1871 that had almost the city disappear, but i know Chicago for its most beautiful museums, art galleries that i have come through in my Comics career. Follow me as i take you to the world Of Douglas Klauba, one of my favourite american artists of all times, extreme precision, so talented, and a technique that is out of this world !

Douglas Klauba has created cover artwork for books featuring such famous characters as Zorro, Kolchak: The Night Stalker, Doc Savage, The Avenger, The Spider, and The Phantom, among others. His dramatic style, influenced in part by the pulp magazine and early movie poster art of the 1930’s thru the 1950’s, is known as “Heroic Deco” and has earned him acclaim from collectors and clients around the world.

Doug’s cover paintings for The Phantom from Moonstone Books are recognized as fan favorites and quickly became Moonstone’s signature cover artist for not only the Ghost Who Walks but also for a number of their pulp and crime titles.

Being a fan of pulp characters and golden age comics for a number of years seemed to prepare Doug for his collaboration with Alex Ross on the Dynamite Entertainment monthly series Project: Superpowers. For the debut issue #0, Doug was one of the artists on the story, working on the present day pages in front and back of the issue. For the continuing series, Project Superpowers Chapter Two he painted two page origin spreads of heroes from the golden age such as The Black Terror, The Death Defying ‘Devil, and The Green Lama.

Doug’s paintings have been included in the art annuals of Spectrum: The Best in Contemporary Fantastic Art and the Society of Illustrators. His painting “Mercury Jack” was among the 250 works exhibited in the Spectrum Show at the Museum of American Illustration and his painting “da Vinci’s Dream” was awarded Best in Show at the 2005 World Fantasy Convention.

1. at what age did you know you wanted to be an illustrator/comic artist ?
I can not think of a time that I was never an artist or knew what I was going to do. My family supported me in my interests, especially because both sides of my family have artists, designers, performers and creative professionals. Growing up I was very aware that my uncle was a Chicago illustrator and designer that worked for one of our large newspapers. He was also a fine artist and we often visited his gallery shows (and still do). Anything visual excited me as a young developing artist and early on I was very curious about anything “fantastic” like science fiction and fantasy. Because of the wonderfully and brightly colored comics, I was drawn to them. I started out collecting Classics Illustrated, mostly because I was a good reader and enjoyed books like Dr. Jekyll and Mr. Hyde and The Three Musketeers…. A lot of those comic books were passed down to me by my father and uncles. By the time I hit my teen years I had a great group of friends that shared my interests. We often collaborated on our own comic book stories, published fanzines, made Super 8 movies and recorded “old time radio” dramas. So, I have always been on this path to pursue my interests. I was always surrounding myself with comics, illustration, film and music. When I arrived at the American Academy of Art in Chicago I had intended to be the best comic book illustrator I can be but by the time I had finished the program, the school had given me the skills and interests beyond what I expected. After I left art college I immediately was employed at an illustration studio that provided design and finished art for Chicago ad agencies and design firms. Before I knew it, I eventually became the senior illustrator and “forgot” about comic books and pursued commercial illustration. Skip ahead a number of years and still a comic book fan who attended conventions (as a fan) I began to incorporate my interests more and more into my commercial portfolio. Seriously, my portfolio was professional BUT it only showed what I can do and not what I wanted to do. Which was pulp inspired paintings, film and entertainment inspired paintings and mostly comic book characters. That eventually started once I began working with Moonstone Books.

.2. where did you study and how long did it take?
I studied at the American Academy of Art in Chicago. I took as many classes as I can there, in both departments: fine art and commercial art. Once I had a strong interest in pursuing illustration I immersed myself in every medium I could get my hands on, watercolor, pastel chalks, oil paint and acrylic paint. After graduation, all these skills were later used and developed further at the studio. Later on, I left the studio, moved to San Francisco and studied at the Academy of Art University. There was an opportunity there for me to study with all of my favorite illustrators: Thomas Blackshear, Kazuhiko Sano and Drew Struzan.

I re-did my portfolio, ran out of money and returned to Chicago and started my own studio. It was an exciting time for me and look back on it with wonderful memories. It truly shaped me into the illustrator that I am today.

.3. You worked with Alex Ross, could you tell us about your collaboration ?
We both went to the American Academy in Chicago, we have mutual friends and we’ve often crossed paths over the years. Eventually, we became good friends, sharing very similar sensibilities, interests and saw each other in our social circles. I would invite him to shows and Alex would invite me to shows. Alex also inspired me into seriously pursuing comic book illustration, full-time. I admire his work. He’s an artists’ artist. An artist that other artists admire for their workmanship and craft. Alex had been seeing my work at Moonstone, specifically The Phantom covers I was painting and some of my paintings that were in the Spectrum art annuals. So, he called one day to catch up and chat a bit. He then asked if I would be interested in working with him on upcoming projects. I, obviously and immediately said, “Yes”! I consider Alex a master of comic books. I’m proud to call him a friend but I saw a great opportunity to see comics through his eyes and learn how he works on a comic book project.

I was initially asked to contribute pages for the debut issue of Project Superpowers. I did page layouts and Alex looked them over for me. Fortunately, I did pretty good and later on Alex recommended that I would illustrate the Origin backups in the following series, Chapter Two. That was more of a collaboration as I rarely received scripts for the origins. Alex handed me rough layouts to work from, which actually worked well. Alex basically wrote those origins a lot easier as drawings instead of typing them out. Again, it was an incredible learning process for myself as an artist. I’ve often stated it elsewhere, but I’m happy to tell you that Alex is great to work with. He’s incredibly gracious, professional and thankful for your effort. And when I would “nail it” in the painting, he would send a message and say stuff like, “this is great”!  and “great job”. I am very thankful that Alex let me work in his super hero arena.

.4. i saw your last exhibition at the Century Guild art Gallery in Chicago, tell us more about it?
Century Guild is my favorite gallery in Chicago. I am not aware of another like it elsewhere. They have incredible works of art, from original art nouveau paintings, drawings, ceramics, jewelry and antique parlor to contemporary symbolist works of art. They have one of the most exciting booths at San Diego Comic-Con and also a publishing group, Olympian Publishing that publishes wonderful artbooks, prints and my favorite comic book, Cursed Pirate Girl. I have a long relationship with the gallery and when they were planning this current exhibition around silent film they called an asked if I can contribute black and white portraits of silent film starlets. The owner of the gallery, Thomas Negovan had seen my preliminary work for my own series in development, New Dreaming Men. They were a series of painted black and white portraits of the characters- and he liked them very much. He wanted the starlet portraits in the same way and I was thrilled to be involved. And happy to say the portraits are selling very well. Also New Dreaming Men is moving along fine and the plan is to have the “prologue” (or first chapter) ready for Comic-Con this summer. Time is ticking away….

Please feel free to go and check out Douglas on these pages:

Haïfa Adam
I was born in Lebanon in 1968 and in the mid 70’s during the war, we had no electricity or television, and we couldn’t play outside as we wished, so comic books became our television and best friend, especially on the road. Today i still have that passion and as an agent and gallerist, i am lucky enough to work directly with comics artists, follow me as i take you each month on an interview with some of the hottest comic artists and to some of my favourite galleries, either in paris at gallery Napoleon www.galerienapoleon.com, or in the United States at some of the hottest ComicCons and galleries as well.

16/04/2011 alle 16:59
supermario
fumettomania.netx
arch.mabe@gmail.com
In risposta a Jákup Magnussen.
I agree with you