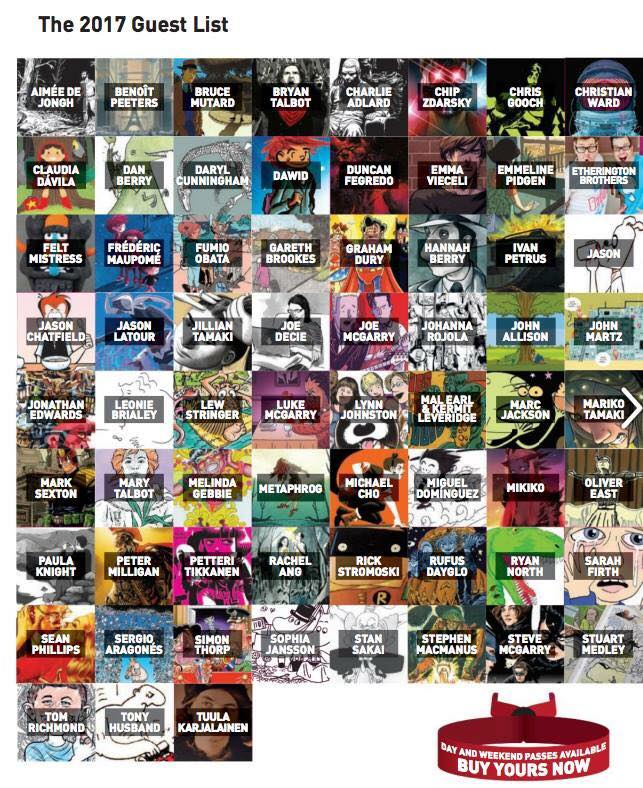 If you want news on the Festival direct to your inbox, sign up here: http://eepurl.com/b01hMH

A huge line up of both British and globe-spanning international comics talent is being lined up for this year’s Lakes International Comic Art Festival, taking place 13th – 15th October 2017.

Celebrating 40 years of the SF weekly comic 2000AD we have Peter Milligan and Steve MacManus.

From Europe: Ivan Petrus,Benoit Peeters, Miguel Dominguez, Jason and Aimée de Jongh. The Festival will also have a special delegation of creative talent from Finland, in partnership with the Finnish Institute, along with many Moomin-themed celebrations. The line-up we can reveal so far includes Johanna Rojola, the equivalent of our Comics Laureate in Finland – and one of Finland’s leading comic artists; and comics art rock star, Petteri Tikkanen

The Comics Clock Tower will also be packed with comic creators from across the UK and beyond, who will be announced in May.

The Festival is the only one of its kind in the UK, taking place in one of the UK’s most beautiful areas – the English Lake District in the North West of the country, in the market town of Kendal. Modelled on European-style festivals, such as Angoulême in France, it takes over the whole town for a weekend of comic art. Its aim is to celebrate the whole spectrum of comic art, inspiring existing comic art fans and creators and, it hopes, generating new audiences and creators too. It invests in creators through a commissioning programme and has an emphasis on developing international collaborations.

The Festival’s dedicated organisers are determined to build on this year’s growing visitor numbers still further in 2017, reflecting their aim to deliver a truly European-style comics festival involving the whole of the local community and visitors in a truly unique comics experience.

Lovely evening at the launch of the first Lakes International Comic Art Festival exhibition for this year l. “Archipelagogo” is by Jonathan Edwards and Louise Evans (aka Felt Mistress), supported by the Finnish Institute, inspired by the work of Moomins creator Tove Jansson, is open! Info: http://downthetubes.net/?p=40526, the Comic Art Festival takes place in Kendal, 13th – 15th October www.comicartfestival.com. Smashing to catch up with John McShane, too – on fine form as ever!

One of the most famous and influential living cartoonists, Sergio, perhaps best known for his work on MAD Magazine, is world renowned for his fast and witty cartooning style. He has won every major award in the field, including the National Cartoonists Society’s Reuben Award, and the Will Eisner Hall of Fame Award.

Sergio will be announcing the first ever recipient of The Sergio Aragonés International Award for Excellence in Comic Art as part of the festival opening night on Friday 13th October: http://downthetubes.net/?p=40581

With just over two weeks to go to until this year’s Lakes International Comic Art Festival in October (13th – 15th). The downthetubes “Kendal Calling” interviews continue with a chat with award-winning comics writer and Festival patron Mary M. Talbot: http://downthetubes.net/?p=40577

There’s not long to go now until this year’s Lakes International Comic Art Festival in October (13th – 15th). The downthetubes “Kendal Calling” interviews continue with a chat with award-winning comics artist, writer and Festival patron Bryan Talbot, who will be launching the fifth and final Grandville graphic novel at the weekend-long event: http://downthetubes.net/?p=40523