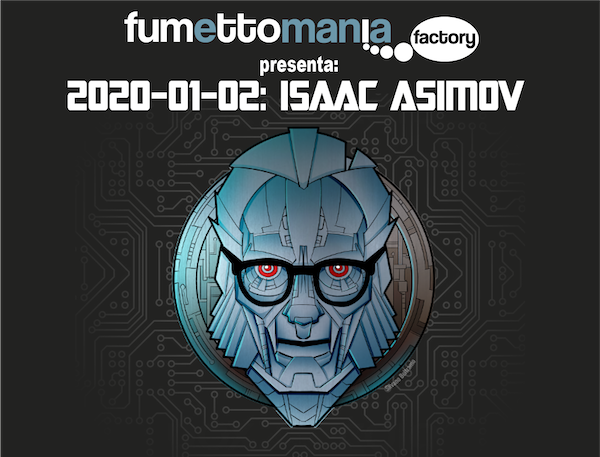 The Russian writer and scientist, naturalized American, Isaac Asimov, introduced me to and loved science fiction! While still in secondary school, I would devour his novels, which I found in the library of my school, and read his scientific articles with interest.
The reading of the Cycle of the Foundation, and of the Cycle of the Robots (even if at that time I didn’t know it was a cycle) were even fulminating, and over the years it was enough a film (Io, robot of 2004) or a song (I robots, of 1977, but I heard it for the first time in the late eighties) or a italian comic (Nathan Never from 1991) to go back to re-read one of his novels.
And yet, in 2008 Pro-zine Fumettomania closed its long paper production (1990-2008) with a double number, 18 and 18bis, dedicated to “War and comics”, and the second part of the study (pages 35 -56) was dedicated to him and to the Psycho-history, the latter used in a famous Marvel saga.
This long introduction to announce that the second Fumettomania project for the 2019-20 winter, on the centenary of his birth date, is dedicated to:

The special will begin to be published 2 January 2020!

We wait until December 31st to participate and “board our spaceship”.
The first accessions (4), of which one by a great international author, are very encouraging and I wish (and we wish) to be a beautiful celebration, in music and comics, that we will do on our website-magazine. Also for the first time we will collaborate with Mirko Leo, with the italian magazine and with the Lo Scarabocchiatore Association to publish a preview of some of the interventions and illustrations of this project, in the issue of LO SCARABOCCHIATORE which will be published next 12 December 2019.

Even Asimov, like E. Allan Poe, lends itself to many insights related to comics, films, TV series, books, music, and theatrical works and Fumettomania will create a SPECIAL TRIBUTE dedicated to him that will be published on this web magazine from 2 January 2020.

You can participate in this special in two ways:

A) A TEXT (if you are a writer or a journalist): an in-depth article about a work by Isaac Asimov, a story or other of at least 3600 characters, including spaces;

B) a tribute drawn in color or in black and white with free technique.
The illustration can be made on paper (and then you can send us the file at high and medium resolution) or digitally.
A short text is welcome to accompany the graphic work, which explains the style used and possibly an anecdote related to the character or the motif that binds you to Isaaac Asimov or one of his works.

The author of the graphic work can then dispose of it (sale or donation) freely as owner.

IMPORTANT: In order to publish texts and drawings from January 2020 onwards, in a nice and programmed way with a minimum of lineup, it will be necessary to deliver your contribution no later than December 31, 2019.

PLEASE NOTE: the first lineup of publication will be realized with those who delivered by October 30, the second with all the others.

Finally, each contribution must be accompanied by your biography and one of your photos, in order to give maximum visibility to each of you.

Isaac Asimov was born on 2 January 1920 in Petrovichi, near Smolensk, in the Soviet Union. In 1923 the family moved to the States, to New York, where Isaac later completed his studies.

THE EXTRAORDINARY DOTS OF THE PRODIGIO CHILD IMMERSE IMMEDIATELY. IT IS SUFFICIENT TO THINK, FOR EXAMPLE, THAT ONLY FIVE YEARS LEARN TO READ ONLY (ALMOST AS LEOPARDS) AND THAT THEN AT THAT TIME IT WILL NEVER STOP READING TO READ BOOKS AND TO STUDY.

In this sense, his frequent visits to national libraries are legendary, his only source of intellectual “sustenance” in the first years of his life and for a long time afterwards. The passion for science fiction infects him in 1929 when in his father’s shop (in those days the American candy stores didn’t only sell sweets, but also newspapers and magazines) he discovered the magazines of “Science Fiction”, of which he immediately became a regular reader.

The promises are widely maintained and the father can only be proud of a son who first graduated in Chemistry from Columbia University in New York (Bachelor of Science Degree, 1939) and who then, not satisfied, graduated also in Philosophy ( Master of Arts, 1941).

After the US entry into the war, Isaac Asimov works as a chemist at U.S. Navy Yard in Philadelphia. Between 1949 and 1958 he is a professor at the Boston University School of Medicine.

Subsequently, thanks to the success of his works, he abandons his academic activity and becomes a full-time writer, thus giving life to his endless production, fruit of his vein that to call prolific would be really reductive.

In fact, Isaac Asimov is unanimously considered one of the greatest science fiction writers of all time. His fortune is due to the happy marriage between literary invention and scientific truth that manages to make his books plausible and fantastic together, true mirrors of a possible future. In the literary environment its fine satirical and ironic vein is known, which can also be found in some of his works, especially in the prefaces.

KNOWING ME, IN ITALY AS IN THE REST OF THE PLANET, THERE ARE AMONG THE BOOKS OF ASIMOV, THOSE BELONGING TO THE CYCLE ON THE FUTURE OF ROBOTICS (I, ROBOT; THE SECOND BOOK OF ROBOTS) AND THE “FOUNDATION” CYCLE (TRANSLATED WITH THE TITLES OF “CHRONICLES OF THE GALAXY”, “THE COLLAPSE OF THE CENTRAL GALAXY” AND “THE OTHER FACE OF THE SPIRAL”).

Isaac Asimov died on April 6th 1992 due to complications in the cardiovascular system, throwing thousands of fans around the world into bewilderment.

In 2002, his second wife, Janet Jeppson, revealed that Asimov’s death had been caused by AIDS, a disease he had contracted in 1983 during a blood transfusion. The writer would not have wanted to keep the secret, more likely the hospital, to avoid a scandal.

The image of the banner proposed for the promotion of the project was created by Silvano Beltramo, and was granted to us free of charge by STEREOTOMY – The Alan Parsons Project Tribute Band, which we thank, and of which we propose the POSTER of their show dedicated to Asimov and a brief BIOGRAPHY.

Group composed of 9 elements from different musical experiences.
They perform in clubs and theaters bringing in concert the sound of the master of sound engineers Mr. Alan Parsons, known for having made the sound of the famous Pink Floyd masterpiece “The dark side of the moon” and having collaborated, as well as with the Beatles, with dozens of artists who have made the history of world music.
The band stands out for the particular alternation of the voices, a characteristic of the Alan Parsons Project, which has boasted over the years the participation of important names in the world song scene such as John Miles, Lenny Zakatek or Gary Brooker the voice of Procol Harum. And it is precisely with Lenny Zakatek that Stereotomy held a concert in July 2014 in Turin, as part of Parsons Day, an event dedicated to fans of the Alan Parsons Project still numerous today.

The band, over time, has also ventured into theatrical performances such as the “Project Poe” and the “I Robot Project” inspired by the music of the Alan Parsons Project and the stories by Edgar Allan Poe in the first case and by Isaac Asimov in second, as well as in thematic concerts / shows, such as “Eye in the Sky – Emotions beyond the sky”, that is, a musical journey among the stars.

And here is a brief “PREVIEW” of I Robot Project: